Located at the west part of Resorts World Sentosa is the amazing Beach Villas. This beach resort is a secluded tropical sanctuary, this is a perfect location to relax and unwind. You will also be able to visit attractive places like the Adventure Cover Waterpark for a splashing good time as well as interact with dolphins at Dolphin Island. Stroll over to one of Asia's biggest theme park, Universal Studios Singapore and have some fun with the rides and the shows! Sentosa has one of the most diverse cuisines so step ahead to the restaurants that offers variety of cuisines. 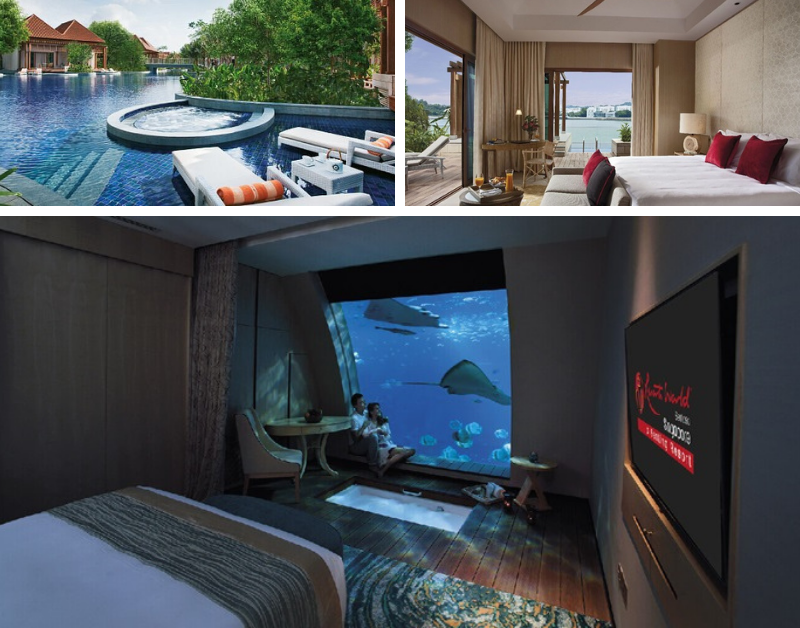 Sea Aquarium
One of the world's largest aquariums, "Open Ocean," is home to 40,000 marine creatures, including the rare manta ray.
The Shark Sea, a favorite among children, is home to more than 100 sharks, including endangered species.

Adventure Cove Water Park
The longest flowing pool in Southeast Asia at 620 meters, six water slides, and even a snorkeling experience with 20,000 marine creatures! There is also a slide that uses magnetic technology to run in reverse.

Dolphin Island
We offer a variety of exchange programs that allow visitors to interact with dolphins.
Interacting with curious dolphins is a unique experience.

◎Villas that offer a resort-like atmosphere

The villas are located in a quiet environment surrounded by greenery. These beautiful beach villas are filled with luxurious comforts, including spectacular views and personal butler service. They are perfect for a rewarding vacation or a romantic retreat.
Spend a relaxing vacation with a bit of adventure, a wild water adventure at Adventure Cove Waterpark™, or a dolphin encounter with Dolphin Island™'s "Learn to Play with Dolphins" program.

◎Ocean Suites facing the giant aquarium tank of the Sea Aquarium, one of the largest aquariums in the world

All 11 guest rooms are designed like two-story townhouses, each with the best of both worlds: land and sea. The upper level features an open living area with access to an outside patio and Jacuzzi, while the lower level offers an underwater world with over 40,000 marine fish.

Hidden away beside the world's largest aquarium, you will be treated to the comforts of a 5-star hotel and personalized butler service. Enjoy the spectacular world of the sea.

Please also check out the article :

/ per night for 2 guests

Navigate forward to interact with the calendar and select a date. Press the question mark key to get the keyboard shortcuts for changing dates.

Navigate backward to interact with the calendar and select a date. Press the question mark key to get the keyboard shortcuts for changing dates.